The 10mm is one of the most powerful rounds designed to be used in a semi-automatic pistol.  With even MORE stopping power than the .45 it has quickly developed a loyal following.  The round works very well in pistols such as the 1911.

The 10mm round was the brain-child of legendary gun enthusiast Jeff Cooper.  The idea was to create a round with ballistic similarities to the .45 but in a more compact form.   The 10mm offers similar performance to the 45 ACP and has significantly more knockdown punch compared to 9mm rounds.

As the 10mm is well-known to have significant recoil, practice is highly recommended to become proficient with this round. 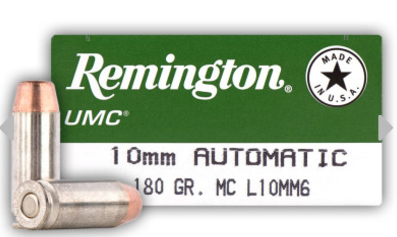 From the title itself, it is rather obvious that the manufacturer is in fact Remington UMC. Remington is one of the popular firearm brands so the excellent performance of your weapon containing this ammo guaranteed. In terms of packaging, it comes with 50 rounds per box. And since it only has a box, you have 50 overall rounds, if you do the math.

It is a lot cheaper if you buy the ammo in bulk or get a progressive reloading press to make your own ammo. However, if you’re not an avid shooter or just a beginner, it is best to try out shooting with lesser ammo incase you decide that shooting isn’t your passion after all.

Moreover, this 10mm ammo is equipped with metal case (MC) bullets with a bullet weight of 180 grain. If it isn’t obvious, the bullet weight is measured using the unit grains. So, you may be wondering how the bullet weight affect your ammo. To enlighten you, it might have a little impact on the recoil and accuracy performance.

Not only that, the bullet is flat point, non-magnetic not forgetting, clean. In other words, there will be no residue left after firing rounds. However, that cannot be used as an excuse for you not to clean your weapon because proper maintenance is essential to ensure the best performance of your gun.

In my experience, it works extremely well in 10mm Glock pistols. The bullet type on the other hand is full metal jacket, where the bullet comes with a soft core enclosed by a shell of a harder metal. The bullet base is exposed lead.

Moving on the ammunition, it has a muzzle velocity of 1150 fps whereas a muzzle energy of 529 foot pounds. The ammo perfectly cycles through with the least probability of getting jammed. In other words, it feeds and fires and is rather great to be utilized in plinking and target practice applications, mainly by law enforcement agencies and avid shooters.

In addition to that, it has a primer type boxer with a nickel-plated brass casing. That being said, this popular primer style contributes to quicker and easier reloading as it can be removed with ease. The brass casing on the other hand ensures that it is rust-resistant. 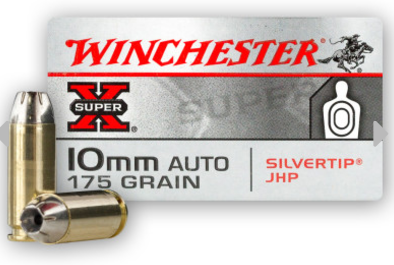 In total, this 10mm carry ammo has 20 rounds in which all 20 rounds comes in a portable and solid box. The box is solid and holds the rounds safely and securely in the midst of hunting. In my opinion, it is a little expensive over its few included ammo however, it sure does guarantee excellent performance.

Besides that, the bullet weighs 175 grain and has the jacketed hollow point (JHP) type. That being said, the JHP type of bullet comes with an alloy metal coating which comes in handy to increase its strength as well as prevent the fouling of barrel.

Back to its history, its manufacturer, Winchester Super-X Silvertip initially developed this product for the usage of law enforcement officers. It utilizes the brand new JHP bullet, replacing the traditional hollow points for better shooting performance.

That being said, the Super-X ammo is notched to provide positive expansion upon impact as well as delivers rapid energy release and amazing penetration, paired together with virtually no signs of bullet fragmentation and weight loss. In other words, it comes with great expansion and penetration qualities as well as impressive energy dump at a short distance.

In terms of energy release, this 10mm personal defense ammunition has a muzzle velocity of 1290 fps and a muzzle energy of 674 feet pounds. It is mainly used for self-defense against predators. The price is a little expensive, however it promises clean and accurate shot.

Moreover, the casing is non-corrosive and boxer-primed. If you have noticed, most casings are actually boxer primed as they contribute to quick and easy reloading since the primer can be removed and replaced with maximum ease. Not only that, the case can be reloaded as well. 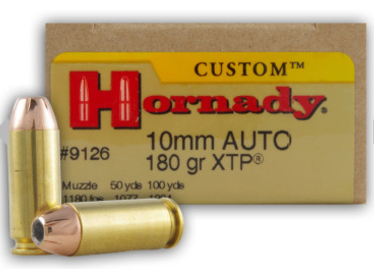 Mainly used for self-defense, this custom made ammunition has a great reputation for its high tolerance and great quality bullets. That being said, the renowned XTP bullet comes with maximum knockdown power therefore resulting in an impressive penetration when in contact with your target.

All in all, this product has excellent and full potency 10mm load, utilized for hunting and personal defense. In other words, it has zero failures in firing hundreds of rounds as well as ensures clean firing with fantastic penetration and outstanding expansion to guarantee the best shooting experience.

Manufactured by Hornady, this product is equipped with a total of 200 rounds. In terms of arrangements on the other hand, it has 20 ammo rounds per box and 10 boxes per case to fit all the 200 rounds neatly and in an organized manner.

Furthermore, the ammo casing is boxer-primed brass that contributes to convenient reloading. Also, the casing is non-corrosive hence built to last in the long run, as well as reloadable. The boxer primers utilize an anvil as a part of the primer itself. The cases only has one flash hole in the middle meanwhile the anvil comes with 3 arms that spans the flash hole for easier reloading. 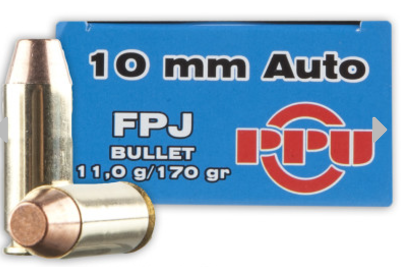 Manufactured by Prvi Partizan, this boxed ammo is priced rather affordable. Because it is available in bulks (500 rounds), it is a lot cheaper than buying individual 50-rounds ammo. So, if you’re an avid shooter or extreme gun enthusiast, you should totally go for the ammo available in bulks because it will totally be worth your investment.

In terms of arrangements to accommodate all 500 rounds, this product comes in 50 rounds per box and 10 boxes per case. The bullet on the other hand weighs 170 grain and is the full profile jacket (FPJ) type. The FPJ design features a thick jacket that envelopes the entire bullet profile. That being said, the heavy base is enclosed to withstand the high pressure of loads therefore contributing to the accuracy of your shot. Also, it is designed to provide minimal expansion as well as deep penetration.

Moving on to the ammunition, it fires a medium weight of 170 grain flat point jacketed bullets, with a muzzle velocity of 1115 fps. Very similar to the FPJ projectiles, the flat point bullets comes with a flat nose instead of a spitzer or rounded one. That being said, it is mainly used for 10mm auto cartridges.

In addition to that, it is utilized commonly for range training applications. The bullet has a deep penetration therefore producing more visible holes in paper targets. Apart from that, the ammo shoots well without any unintentional misfiring. All in all, it provides a clean and accurate shooting performance.

The casing on the other hand is made out from non-corrosive boxer primed brass. This type of primer comes with a cup and anvil which makes it rather easy to remove the older primer with just a simple pin punch. Hence, the solid brass case assists in fast and easy reloading. 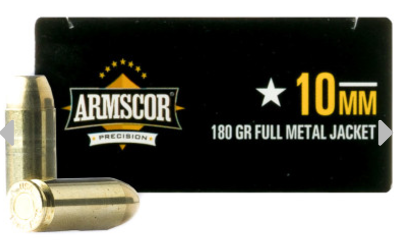 First things first, this ammunition is manufactured by Armscor. It is equipped with a total of 1000 rounds and is very suitable for serious hunters. As I have mentioned before, buying ammo in bulks are a lot cheaper compared to buying multiple 50 round box. So, if you’re a frequent hunter, buying this product would really benefit you and is well worth your investment.

The 1000 rounds are packaged properly and neatly, in an organized manner. There is 50 rounds per box and 20 boxes per case to fit the total 1000 ammo. The bullet on the other hand weighs 180 grain and is classified under the full metal jacket (FMJ) type. In other words, the FMJ is a rather traditional design to provide excellent feeding characteristics in semi-automatic guns.

Furthermore, this product features a boxer-primed brass which comes in handy for convenient reloading. The brass construction ensures that it is corrosion-free when in contact with rainy conditions or moisture. Mainly used as a range training ammo, this product is deemed as a good range ammo.

That being said, this product is designed to be used by the police and military force, gun hobbyist as well as shooting enthusiast. Not only that, it comes with a muzzle energy of 529 feet pounds as well as a muzzle velocity of 1150 feet per seconds (fps).

First things first, the bullet weight is measured in grains (abbreviated: ‘gr.’). They don’t really matter as long as you’re utilizing the right caliber in your pistol. Moving on to the bullet type, there are various types out there. To make the right selection, you need to have a little insight on the types of bullet and its designs.

Check out this informative guide for your reference. (you’ll thank me later!).

Most boxes comes in 50 rounds in total. However, if you’re an avid hunter you should buy the ammunition in bulk because it would be a lot cheaper than buying individual multiple boxes. The packaging is rather neat and arranged in an organized manner. For example, the Armscor product has a total of 1000 ammo. They are arranged in such that there is 50 rounds per box and 20 boxes per case.

The most popular primer style in most 10mm ammo is the boxer-primed brass style. The brass construction ensures that it is rust-resistant. Apart from that, the boxer style contributes to the convenient reloading of the ammo as it can be easily replaced and removed.

All in all, the 10mm ammo can be used with the 10mm pistols. The most famous pistols they are usually used for are Glock pistols. That being said, the 10mm ammunition shoots flatter than a 45 ACP but comes with a higher knockdown punch than the 9mm ammo. Hence, I hope my review assists you in making the decision.