Welcome Zach Herold! He will be sharing with us one of his most exciting hunting experience. I am sure this story will be beneficial to most of you especially those that are just starting out. You get a chance to feel what it feels like hunting elk.

Take it off Herold….

The elk came screaming in, ripping apart a tree 30 yards in front of us. Little did he know, I was at full draw about ready to send a carbon shaft hurtling towards his vitals. 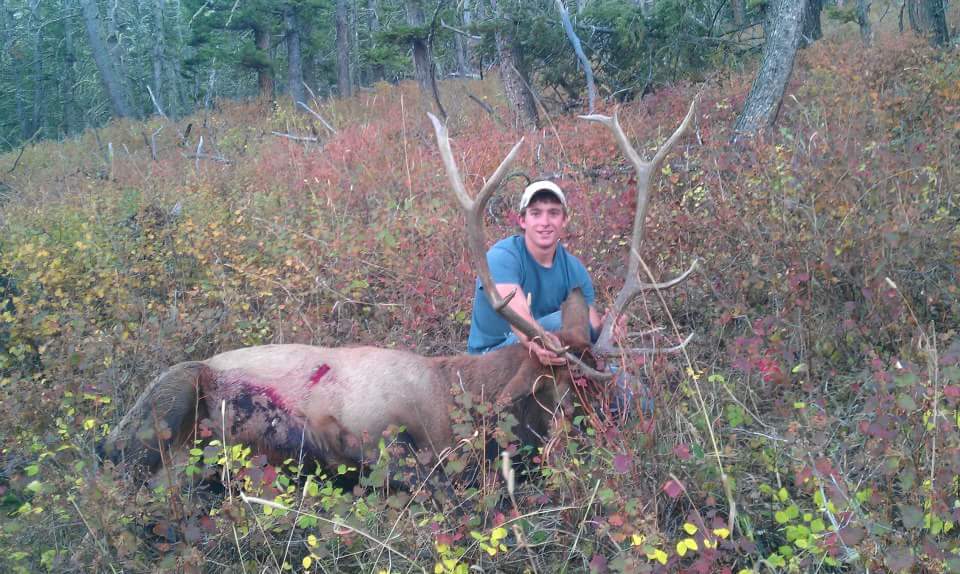 The clock on the dash seemed to be flickering off and on as I struggled to keep the truck between the lines. It read 2:12a.m and we still weren’t at the trailhead yet. As we rounded the last corner on the highway I could see the familiar sign marking the dirt road to the trail head. Coming to a slow crawl we took the left hand turn onto the terrible rocky road…”only two and a half miles of this left” I thought.

After what seemed like an eternity of being thrown around the cab of the truck we arrived at our destination, which was right on the border of private land. The only way around it was to drop straight down to the bottom, scale the rock slides, through the black timber, down water falls, and through all the blow downs. No one in their right mind would go through all that hell just for an elk let alone try to pack one back out, but that was our game plan. With the season winding down it was crunch time and we needed to be where others wouldn’t dare to go. I looked over at Jessee, then at the clock now showing 3:15a.m and said “lets crash in the truck tonight and hit it hard in the morning”.

The sun bouncing off the mirror and hitting me square in the face jolted me awake. I looked around and noticed how high the sun was, we had over slept. I reached over and woke Jessee up and we scrambled to get our camo on, packs loaded with four days worth of supplies, and headed into the hole.

The trip to the bottom was so steep we spent most of our time trying not to slip, fall, and roll to the bottom. Although it would have saved a bunch of time it wasn’t part of the plan. We finally made it to the bottom and started side hilling through the mass of blow downs and rock cliffs. After about an hour of trying to be mountain sheep, we came to a ten foot rock and log jam that was a straight drop off with no way around it. 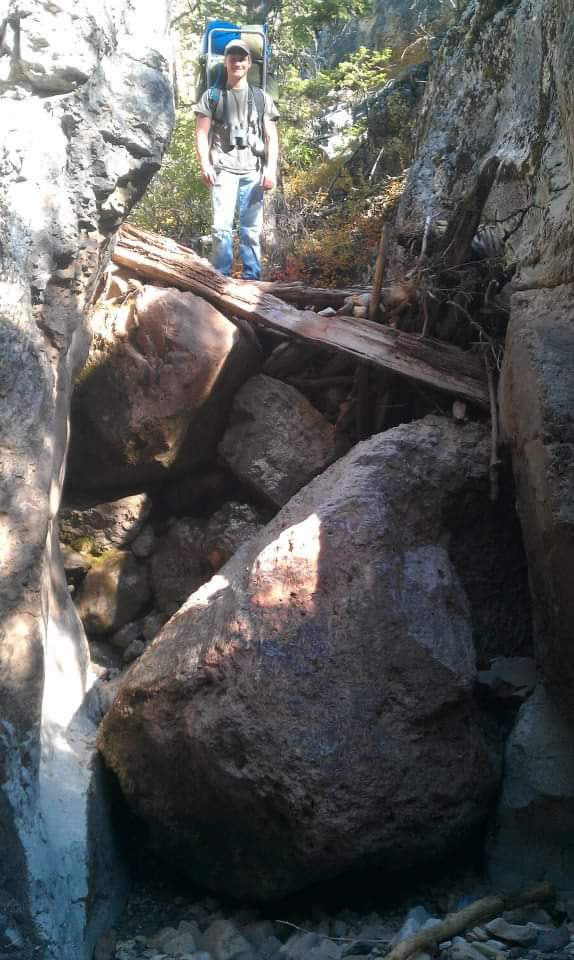 We carefully scaled the jam and made it to the bottom with no idea how we were going to get back up it with an elk on our back.

After all the obstacles, round about trips, and close calls we finally made it to where we could start hunting. Exhausted from only 4 hours of sleep and our intense trip in we crumpled under the weight of our packs and took a nap. 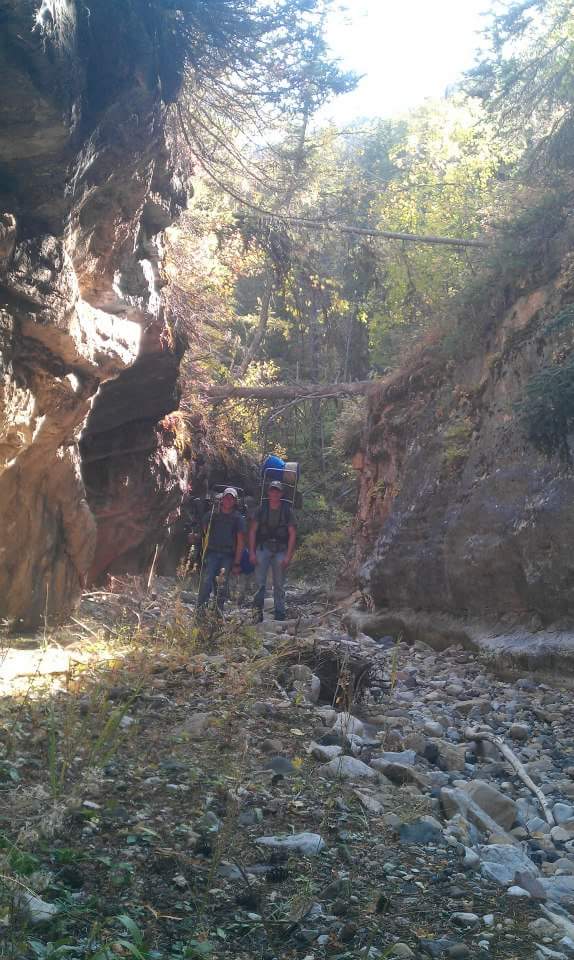 A loud snap and the sound of hooves slamming into the moist earth jolted me awake. What was happening? Was I dreaming? Starring starry eyed up at the blue sky I tried to gain my focus. Now obviously awake, the cracking continued and the smell of elk came into contact with my nose. I slowly reached over to Jessee and gently nudged him. He looked at me with half dollar sized eyes as I had my finger over my lips mouthing “shhh elk right here”. I rolled over on my stomach and began picking apart the surrounding trees, grass, and willows for elk. Not finding anything I reached over and got my bow ready. Jessee and I then crawled about 20ft to our left and set up behind a small bush just as an elk bugle sliced through the silence.

It was only 4:30p.m, crazy that they were already up and moving. I got ready as movement 40 yards in front of us caught my eye. A small five point bull materialized out of the dark timber and was staring holes through Jessee and I. The small bull finally realized something was wrong, turned, and vanished as if never there.

We took a moment to gather ourselves, eat some food, and talk about what had just happened. As the evening set in, I grabbed my bow, my bugle tube, and Jessee and I headed into the black timber to find a love sick screaming sixer.

We walked for about 30 minutes when I let out the first bugle. Immediately a bull responded. We wasted no time to close the distance. He let out another scream and I cut him off challenging him in his home. As we go closer I noticed a small ravine that made a left hand turn. The bull bugled again and we could tell he was up at the top of the ravine. We hustled over to the ravine opening and went to the right of the opening about 40 yards. I threw Jessee a stick and said “after I bugle you beat the hell out of that tree”.

I let out a deafening challenge bugle and Jessee followed it up by racking the tree like crazy. It was a complete smack to the face of this bull that was fired up and pissed off at us for being in his home. We immediately ran over to the left edge of the ravine using the land features to draw the elk right past us.

The elk came screaming in, ripping apart a tree 30 yards in front of us. Little did he know, I was at full draw about ready to send a carbon shaft hurtling towards his vitals. Jessee whispered “30 yards”. I nestled my 30 yard pin behind his shoulder and sent a three blade rage tipped carbon shaft right for the pump station. The arrow was a little farther back than I wanted but still blew through the elk like nothing was there, taking out both lungs.

With no idea as to what was going on he jolted forward about 8 yards then turned to meet his foe that had just gouged him in the side. When he turned and saw that there was no elk the confusion was setting in. By that time my second arrow was on its way which sent the bull crashing away through the pines.

I looked over at Jessee in disbelief as to what had just happened. We had arrived at 3:15a.m, slept in the truck, woke up late, almost killed ourselves getting in here, fell asleep, woke up…without a doubt, the odds were stacked against and somehow, we already had an elk down. Jessee and I met eye to eye and at the same time said “that was awesome, how in the hell are we going to get him out of here”.

We sat down and discussed the shots and gave the elk awhile. Knowing we were in bad grizzly country we didn’t want to add that into the mix of obstacles we already had to deal with getting this elk packed out.

The track job started with finding the first arrow buried deep into the opposite hill side. All three blades were deployed and it was a solid double lung hit. We followed his tracks and began down his trail. It didn’t take long to start finding blood and then we came across the other arrow shaft, broke off and missing about 10 inches. The bull was headed right through a bunch of brush and the blood trail was diminishing. After about 40 minutes of tracking with all the ups and downs that every serious bowhunter has experienced on a track job, we finally found the bull. He was piled up about 150 yards from where we had shot him. The celebration was on and the photo shoot started!

We boned out all the meat and put it in game bags. We then wrapped it in a tarp with the plan of trying to drag it back to camp…that was a dumb idea. After finally getting it all drug back to our packs we sat down, rested, and ate almost three day’s worth of food to make room for elk meet. We left camp, the antlers, and the remaining food there and split an entire elk between the two of us.

The 2.5 mile climb out of there was hell, but it created lasting memories that neither of us will ever forget. We made it back to the truck at 1a.m, slept until 5a.m, went back in, packed out everything else, and was back at the truck by 7:30a.m ready for food and sleep!

Obviously hunts don’t always happen like this and we had some luck come into play. But I can tell you that you are much more likely to be lucky and successful if you are willing to put in the work. To us hunters that work all year, luck is simply when hours of preparation meets opportunity. I had been preparing all year, studying where to hunt, and made it happen with five days left of season. Not only did I fill the freezer and have an awesome time, we created a story that we will cherish and learn from for the rest of our lives.

On this hunt we learned to hunt the hunters and to use land topography to our advantage. Being in college we had been going to all the places that were easy to get to because of lack of time. With the season coming to an end it called for all or nothing and a swing for the fences was taken. By hunting the hunters we located a spot that was extremely difficult getting into, which meant that most likely other hunters had not gone in there. That allowed us to be hunting elk that were undisturbed by humans and very receptive to calling.

To use the land topography to our advantage we had to be quick on our feet. Just like other hunting, we looked for funnels, hill sides, thick brush, or anything else that will cause that bull to come through a certain spot so we could get a shot. If you notice a spot like this when calling make sure to have your last calling spot be from an area that forces the bull to walk over and see where you called from. When he walks over to see where you were last calling from you will be set up to ambush him and he will be totally unaware of your presence because he is focused on the spot where you last called from.

Thank you for reading, I hope something here helps you be better tomorrow than you were today. A big shout out goes to my partner in crime Jessee Craig for being an awesome hunting partner.

Such a great story Herold. If you guys would like to learn more about Herold, you can definitely check out his site at HaloHunter.com.

2 thoughts on “Hunting Experience – The Hole of No Return”